Guest post by Rafael Chiaravalotti, PhD student in the Department of Anthropology at UCL

I never liked extreme things. When I was young my brother was the one that was doing all that – skydiving, parachuting, bungee jumping, he did all this. I, on the other hand, was playing with my LEGO box all time. That is the reason why, when I met Katherine Homewood and Jerome Lewis and they both told me about the possibility of using Extreme Citizen Science in my project, I was a little bit suspicious. I was not sure that I was prepared to change my whole life approach.

However, life is there to be challenged. And even if I am not very keen on extreme things, I do like to use new ways of doing stuff. Probably it is a LEGO-addict thing to do. Anyway, when I heard Jerome talking about ExCiteS I need to confess that I became extreme-ly excited with the idea and decided to apply it in my project.

It’s been almost 2 years since that initial conversation. After receiving grants from Rolex Awards and the WWF to apply the method in the Pantanal, Brazil, here am I trying to explain how I dealt with my first Extreme experience in Citizen Science.

In the project the ExCiteS method was used to better understand the spatial and temporal dynamics of natural resource use. Once we could record this data into scientifically robust and locally legible presentational forms, the customary rules of natural resource use could be discussed with the same level of importance as established environmental scientific information, a request from local communities since the first conflicts over land use in the region arose.

To apply this method the steps outlined by Lewis (2007) were adapted as fallows: 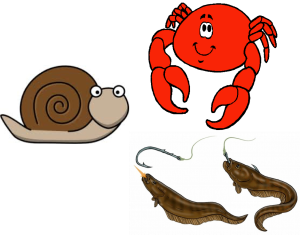 Figure 3: The figure shows the last decision tree for the ExCiteS method in the Pantanal. It presents a much simpler version. This one was used for the Bait Gatherers.

The handheld GPS used was a Samsung X-Cover mobile phone, which is sold as water and shock resistant. However two of them broke in the field: in one the glass broke and in the second one the system collapsed when one person try to use his SIM Card in the phone.

From the total of 40 household families interviewed and asked about the use of the handheld GPS, just two accepted to use it. The first was a typical Bait Gatherer family where fishing is more related to food consumption, and the second was a family of fishermen, where fishing is more related to economic activity. I chose to focus on these two different families to get two different perspectives of land and natural resource use in the region.

It took approximately four months to reach the final stage of the method (number 6); therefore even though my fieldwork started in March 2014 the fishermen only started to collect the data in August 2014. Because of this, and to ensure proper understanding of land tenure and natural resource use in the region, a second participatory mapping approach was added. 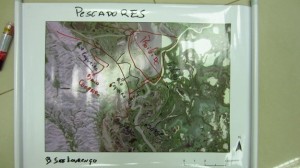 This alternative method consists of displaying local knowledge about the issue in question on a satellite image (Chambers, 2006; Stephanson and Mascia, 2014). In the case of this project I sought to represent on the map issues related to land tenure and the use of natural resources by local people and other stakeholders. Images from the new Brazilian collection of satellite images “Rapid Eye” with 5 meters of resolution in a 1:20 000 scale were used. In total 8 different maps were printed that taken together covered the whole Western Border of the Pantanal region.

All maps were printed on a special plastic paper, on which people could draw, easily erase, and then draw again. Hence, after all interviews pictures were taken of the locally created maps and all the information on the maps was then erased. The main objective of this was first to observe strict data anonymity, second to avoid any previous information biasing the next interview, and finally to facilitate the drawing. The maps were used in both key informant and group interviews.

In contrast to the Extreme Citizen Science method, the information sought was not restricted to fishing and gathering bait. Data was collected about settlements no longer in use, places of intensive use, fishing camps, man-made mounds, cemeteries, locations of houses, important spots for gathering bait, regions of conflict, and the boundaries of local people’s territory.

Now I am back in London and I am analysing the data I collected during the last year. It is amazing because I have started to visualise people’s pattern of natural resource use and elaborate some ideas about how we could use this information to improve environmental management in the region. I need to confess that Extreme Citizen Science has changed the way I see things, and maybe, soon, I am thinking to try my first Roller Coaster!

Chambers, R., 2006. Participatory mapping and geographic information systems: whose map? Who is empowered and who disempowered? Who gains and who loses? Electron. J. Inf. Syst. Dev. Ctries. 25, 1–11.

View all posts by gillconquest