As a fresh member of the ExCiteS team and a new PhD student, it has been a pleasure and privilege to be able to participate in this December’s Cost Action meeting in Berlin, a great conference where 90 people from 32 countries met in order to foster citizen science in Europe. Interesting talks, networking and meetings with remarkable people were something that I anticipated with excitement at my first conference as a PhD student. However, no one warned me about the surprises in store, for example finding my self drinking wine alongside a Giraffatitan (ex brachiosaurus) on the closing night or getting to see a T-Rex in an almost private exhibition. But I will get to that.

The Cost Action meeting was split into working groups, which would explore issues of engaging in civic society, inclusiveness in citizen science, data management and more. During the two days of the meeting, numerous important challenges for citizen science practice were mentioned and discussed in a constructive and collaborative way, giving enlightening perspectives not only from the citizen science practitioners and experts, but also the actual citizen scientists as well. During these conversations, issues like the science behind the motivation for participating in CS and the vulnerabilities of Citizen Scientists were brought up and discussed in contrast with data from real players from Galaxy Zoo, Zooniverse and other CS projects. These discussions highlighted the importance of communities in CS projects and other factors that affected the participation and motivation. Personally, I found it also encouraging to see some small steps being taken towards inclusiveness, regarding gender and other aspects, but a lot of work is still needed to make the field inviting and safe for people of all genders, even 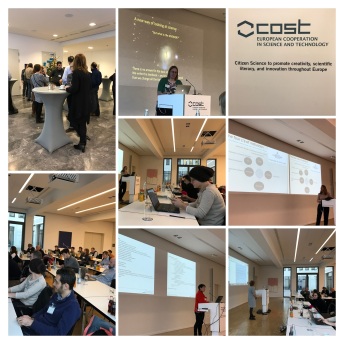 ones
outside of the binary. However, this is still encouraging because now, more than ever it is important to discuss and bring to the front issues that regard being totally and generally inclusive in all disciplines.

By the end of the meeting all six working groups agreed on further steps that need to be taken in the future and deadlines were established for their goals to be met. Given that this was a kick-off meeting, exciting times are ahead for all the groups involved. We wrapped it up with a fancy dinosaur-y dinner at Berlin’s Natural History Museum which allowed us to see the new T-Rex in all of its glory at night in the empty museum, and of course, since the dates were conveniently placed ten days before Christmas, we had a small Christmas Market Crawl in order to familiarise ourselves with the German traditions of wooden ornaments and gluhwein. An amazing experience overall, quite promising for what the future holds for me as a PhD student and as part of the brilliant ExCiteS group.